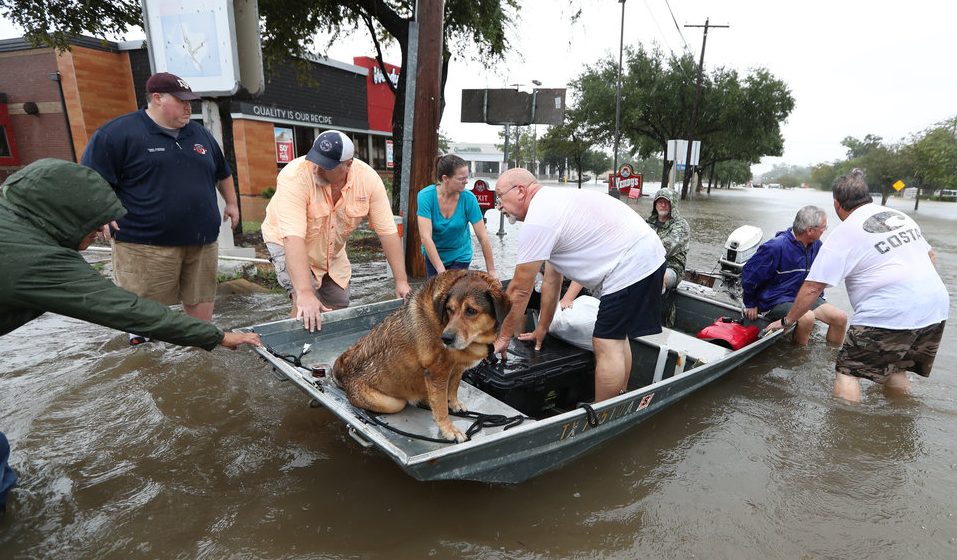 The 8 Most Impactful Changes of the SECURE Act 2.0 for Your Employees

How to Protect Your Business Against Cyber Attacks

How Relation Builds Business and Invests in Relationships Neighbors are using their personal boats to rescue Friendswood residents in Houston during Hurricane Harvey.

Each year, we watch in horror as unsuspecting folks—living normal lives similar to our own—are rescued from their rooftops via watercraft after their small town has been ravaged by natural disaster. Most recently, by Hurricanes Jose, Harvey, Irma, and Maria. In news interviews, residents express something along the lines of, “My family and I have lost everything,” or “There’s no way to understand this unless you’re here, living it.”

Do you wonder what happens to these people once the debris settles? Or how they rebuild and attempt to resume normal lives?

According to an article by the Wall Street Journal, only 50 percent of homeowners in Puerto Rico, who are currently facing mass power outages and destruction in the wake of Hurricanes Irma and Maria, have insurance policies protecting them from wind damage.

In Houston, Federal Emergency Management Agency (FEMA) data reveals only about 17 percent (1 in 6) of the homeowners most affected by Harvey have flood insurance policies. This 17 percent likely has—depending on their level of coverage—access to up to $250,000 to rebuild their homes and $100,000 to replace personal belongings.

The other 83 percent, or 5 out of 6 homeowners most affected, however, aren’t as fortunate—they’ve lost their belongings, their homes, and likely decades of hard work and savings, with nothing to show for it and likely no opportunity for short-term recovery. According to one Washington Post article, this group “will be dependent on private charity and government aid, especially grants from Federal Emergency Management Agency.”

Most people don’t realize that FEMA doesn’t pay individuals for any of their personal recovery; rather, they provide low-interest loans to homeowners who lack flood insurance if—and only if—the conditions satisfy FEMA’s specific definition of “flood” and a state of emergency is declared. Every penny of the federal loan must be paid back in full, with interest.

My name is Kelly Tonsing, and I’m a licensed insurance agent at Ascension Insurance, Inc. in North Carolina. As such, I frequently discuss flood insurance (and the lack thereof) with clients who have homeowners’ insurance. When I ask clients why they’ve opted out of such a crucial policy, I typically receive one (or more) of the following responses: “I just can’t afford it,” “My house isn’t in a flood zone,” or, my personal favorite, “I don’t need it—I live on a hill.”

I’m here to talk through each one with you.

I Can’t Afford It.

First, let’s talk about the cost of adding flood insurance to your existing homeowners’ policy. According to ValuePenguin, flood insurance policies purchased in 2017 through the National Flood Insurance Program (NFIP)—a program established in 1968 by the National Flood Insurance Act (NFIA) allowing property and/or homeowners to purchase flood insurance directly from the federal government—averaged $56 per month. In Texas, home of Hurricane Harvey, 2017 flood-insurance premiums through NFIP were only $40 per month (that’s $482 per year—28 percent below the national average).

Other states on the lower end of the premium spectrum include Florida, which is currently experiencing the devastating consequences of Hurricane Irma, Maryland, Arizona, and Alabama. To clarify, rates have less to do with which state you live in and more to do with how far away from water you live and how much coverage you want. Private insurance rates may be even more competitive compared to those of NFIP’s.

According to FEMA, there are also other great opportunities for discounts and steps you can take to mitigate risk and lower your monthly flood-insurance premiums.

So, for the same cost as a monthly fast-food run for four, you could instead implement flood-insurance coverage, which—in the event of a damaging flood—would provide you the monetary support to rebuild your home and purchase new belongings (e.g., furniture, clothing, a television, etc.) for you and your family.

I Don’t Live in a Flood Zone.

This is one of the most common explanations I hear for not protecting one’s property from the possibility of flooding. According to FEMA, more than 20 percent of flood claims in the U.S. originate from owners of properties outside a designated “high risk” flood zone. According to an article by Maggie Koerth-Baker, senior science writer for FiveThirtyEight, that number in Houston is currently closer to 30 or 40 percent. She goes on to argue that the entire concept of the 100-year floodplain is misunderstood, and designated flood zones are “best understood as estimates—and not necessarily very reliable ones.”

Not sure if you live in a flood zone? Each year, FEMA publishes maps detailing flood hazards and showing flood risk levels “based on historical climate information and the best available science.” To check out the map for your area, click here. To view your area’s flood history, check out FEMA’s interactive visualization tool here.

For those who live on a hill or atop a mountain, it is still wise to consider the possibility of flooding from rainfall. Consider my family’s personal anecdote: We own a mountain house located on the Blue Ridge parkway, a beautiful scenic highway in North Carolina and Virginia. Although located at an elevation of approximately 1,850 feet, the home incurred severe water damage from rainfall washing down the mountain.

Mudslides, caused by excessive rainfall, occur regularly in mountainous communities and have been known to completely wipe out homes’ walls and foundations. Without flood insurance, the full financial burden for necessary repairs after such an event falls solely on the shoulders of the homeowner. What would you do if your home in the mountains was severely damaged by rainwater flooding or a mudslide? Have you considered the potential financial devastation and how you might recover?

It’s time to take a serious look at flood insurance to protect you, your loved ones, and your property from one of the costliest natural disasters in the United States. Here are some startling statistics from Risk Analysis, An Official Publication of the Society for Risk Analysis:

If you need more reasons to consider flood insurance, watch this story about two property owners who underwent the same natural disaster in 2009 and had very different experiences.

Kelly Tonsing manages Ascension’s Personal Lines Practice in our eastern region. She is charged with the strategic direction of the department and for providing an excellent client experience to more than 10,000 policyholders. Upon joining the insurance industry, Kelly found her true passion and skill for leading others in a business built on the value of relationships. She enjoys writing blogs to share her knowledge of and experience in the insurance industry in an approachable and caring way. Connect with her on LinkedIn!